This is my first post in English. In the following I’ll translate the post of the category software development into English. I apologize for the mistakes I make.

Before reading this post, you would read this post – in Spanish – from my other site: formulario exprés de edición de recetas.

I believe that one of the most important things which should ocuppy a software developer is the appearence of their programs. I speak of the interface in general: from the icon, the way to access the several options of the program, and of course the appearence of the forms.

So far, I followed the trend of adding fields to the forms to store as much information about the object of my programs, like recipes, books, etc. My thought was: the more information the program stores the most complete is, and therefore better. As all the fields did not fit in a single form, I added folders grouping the fields to easy their edition, taking care that the identifier field always remains outside of the folders. From my point of view, the use of folders in forms has two conflicting features: it allows increasing the amount of stored information, but when increasing the number of tabs of the folder makes the form more complex to use. When you switch from one tab to another, you hide some fields and show another ones, and have to retain in your memory the hidden information. I think that a lot of users become overwhelmed with the use of folders in forms.

It is also possible that use of certain fields of the forms goes related with different user’s profiles. In the case of el Puchero, my recipe management software, some features like the scaling assistant goes associated to a profesional use of the program, while home users wants mainly agility when editing recipes. How to reconcile the interests of these two types of users? How lighten folders from forms without losing functionality?

In my case, I decided to make two different edit forms for editing the recipes in el Puchero. There is a complex form with folders, and in the release 5.0 of the program I introduced a plain form, without folders, that I called express form. The program allows switch from one form to another when editing a recipe with a single click in a button, and also remembers the editing mode of every recipe, showing a different icon in the recipe’s grid and when a user goes to edit a recipe, the program shows the same form used in last access to the recipe. 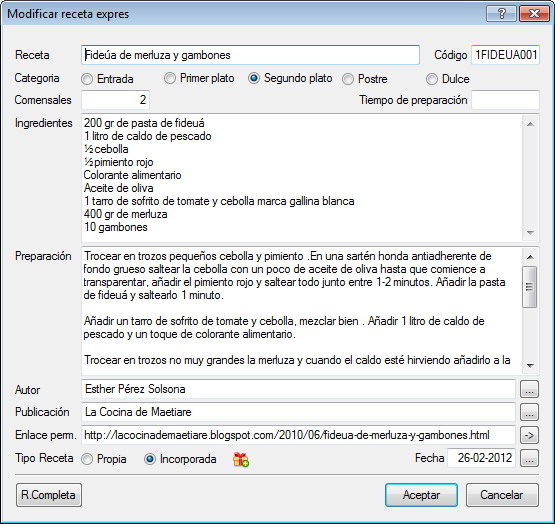